To share your memory on the wall of Monty O\'Brien, sign in using one of the following options:

To send flowers to the family or plant a tree in memory of Monty L. O'Brien, please visit our Heartfelt Sympathies Store.

There are no events scheduled. You can still show your support by sending flowers directly to the family, or planting a memorial tree in memory of Monty L. O'Brien.
Visit the Heartfelt Sympathies Store

Donations are being accepted for: The Salvation Army.

We encourage you to share your most beloved memories of Monty here, so that the family and other loved ones can always see it. You can upload cherished photographs, or share your favorite stories, and can even comment on those shared by others.

Posted Dec 16, 2020 at 11:36am
So sorry to hear and read of Montys passing. My husband and I were across the road neighbors of Monty and Elaine for 20 years. What a wonderful man he was. Always enjoyed trying to keep up our lawn with his, talking in our driveways while shoveling snow, seeing him do his walks thru the neighborhood. My husband really enjoyed talking football with him especially Notre Dame. He will be missed dearly it was a great pleasure having him and Elaine as neighbors. Deepest sympathies to Elaine, their 2 sons and the entire family.
Cathy & Steve Ruzicka
Comment Share
Share via:
LC 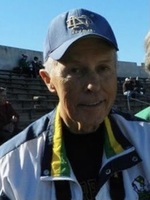