To share your memory on the wall of Robert Crupie, sign in using one of the following options:

To send flowers to the family or plant a tree in memory of Robert Paul Crupie, please visit our Heartfelt Sympathies Store.

Donations are being accepted for: Amedisys Hospice.

We encourage you to share your most beloved memories of Robert here, so that the family and other loved ones can always see it. You can upload cherished photographs, or share your favorite stories, and can even comment on those shared by others.

Love Liz, Peter, Shawn, Katie, Tina, and Kristopher, and other have sent flowers to the family of Robert Paul Crupie.
Show you care by sending flowers

Posted Apr 16, 2021 at 01:25pm
I had the pleasure & good fortune of playing Slow Pitch Softball with Bob & John Crupie for both the Norwin Stars & Norwin Lounge Teams in the early '70's. I have many fond memories of our success's, good times, & friendships from those years of competing.
Comment Share
Share via:
LS

Posted Apr 02, 2021 at 06:17am
I had the distinct honor of playing baseball with Bob for the Bruggeman Champion Pony League Team in 1957. Bob was our outstanding short-stop for that team. He truly loved the game of baseball, and he always played it with great passion, and grit. That team was managed by his brother John, who was probably the “best manager” that I had played for. Another great baseball honor I had was coaching Bob’s son for the Norwin Colt League. On a final note, about 8 years ago my wife and I were fishing for trout at Mammoth Lake, close to “dad” Bob. He helped set- up the line for my wife, a rookie fisherman, and in a short time period she caught two 17 inch trout.
Comment Share
Share via:
KK

Posted Apr 01, 2021 at 08:53pm
Jenn, We are thinking of you & your family and wishing you comfort during this difficult time.

Posted Apr 01, 2021 at 02:13pm
I am so so sorry to hear about Bob’s passing. My thoughts and prayers are with all of you. Cathy Williams
Comment Share
Share via: 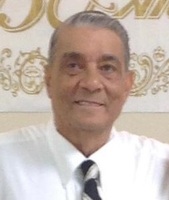